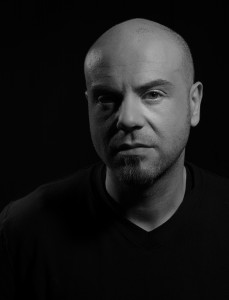 Sebastien San grew up to the sounds of Kraftwerk, Giorgio Moroder, Stevie Wonder, Prince and Serge Gainsbourg. In the early 80’s he got heavily into the New Wave and Industrial scene much inspired by Depeche Mode, Cabaret Voltaire, Fad Gadget, Human League, Front 242 and Severed Heads amongst many others. “It was the most amazing thing, say Sebastien. At that time, i could hardly believe that this music was made by human beings”.

The emerging club-culture of the mid-80’s , as well as the birth of Detroit Techno and Chicago House had an even greater impact on him. “I immediately got into it, the sound of those records had a powerful depth and it was generally more funky and danceable”. He consequently landed a job at a local record store where he could get his hands on all those great records. It also helped him launch his own party where he could play those fabulous tracks. “We were throwing parties anywhere we could find, be it a garage, a warehouse or a basement. Tracks Like ‘Strings Of Life’ by Derrick May, ‘Big Fun’ by Inner City or ‘French Kiss’ by Lil’ Louis became instant Classics”.

It is clear that Sebastien’s fascination with dance floor driven music would lead to the development of his own style, which combines deep atmospheric strings and sweet melodies laid over funky beats and rhythms. Sebastien San’s first release on Gigolo Records was ‘Wuxia’, whose ‘Dub Mix’ is already regarded by many as a ‘classic’ track. It was then followed by his first and critically-acclaimed album ‘Duel’ also on Gigolo Records.

Next, Sebastien released the seminal ‘Rising Sun’ on Carl Craig’s legendary Detroit label Planet E Communications which gained him many new fans from across the globe. Consequently, Sebastien has been releasing several EP’s on high-profile labels such as Rush Hour, Echocord Colour, Figure…

The influence of Detroit on Sebastien San’s productions was pushed even further on the release of “Faces” on Room With A View, which features the vocal talent of Detroit’s legend Aaron-Carl (RIP).

Sebastien’s other releases on We Play House Recordings, Night Drive Music and We Couldn’t Care More, give him once again the opportunity to demonstrate his skills at bringing depth and intensity to the dance-floor. He also collaborated with Poker Flat with an exclusive track for the “Gunslingers & Greenhorns” compilation

Early 2012 saw Sebastien returning to Gigolo with his remix of Carl Craig’s classic track “Oscillator.” Right after that, Sebastien decided to launch is own label called Ab Initio, in order to give him the creative freedom he’s looking for. With already seven releases on the counter, Sebastien managed to firmly established Ab Initio (and himself) as a purveyor of quality House and Techno!