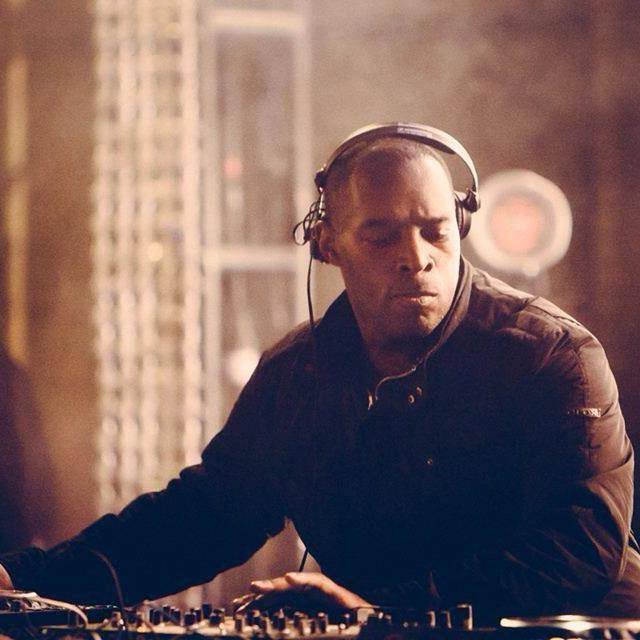 “without the originators, Juan Atkins, Kevin Saunderson and Derrick May — electronic music today would probably look very different. It’s very safe to say they’re the ones who started it…” – Moby

Kevin Saunderson is an American electronic music producer. At the age of nine he moved to Belleville, Michigan, a suburb of Detroit where he attended Belleville High School and befriended two students, Derrick May and Juan Atkins. Saunderson, with Atkins and May, (often called the “Belleville Three”), is considered to be one of the originators of techno, specifically Detroit techno.

Although frequently associated with Detroit, Kevin Saunderson spent the early years of his life in Brooklyn, New York, before moving to Belleville, Michigan, a rural town some 30 miles from Detroit. As teenagers attending Belleville High School, Atkins, May, and Saunderson were fans of DJ Charles “The Electrifying Mojo” Johnson and the pop, disco, and funk music he played. Atkins and May soon became serious about mixing others’ music and creating their own, but Saunderson pursued other goals first, studying telecommunications and playing American football at Eastern Michigan University. Atkins had begun recording with Cybotron in 1981, but it was not until 1985 that May followed suit and made a record. Initially concentrating on becoming a DJ, Saunderson watched the six-month-long process as May completed “Let’s Go;” he was inspired to create his own music.

Kreem, Inner City, E-Dancer Atkins shared his technical expertise with Saunderson, and those early sessions led to a track called “Triangle Of Love.” “I used to wake up in the middle of the night, go into my studio – which was in the next room – and lay down the ideas as they came to me. At the time it was all about experimentation and being a college kid” Saunderson writes on his web page autobiography. “Triangle of Love” was released under the pseudonym Kreem on Atkins’ label, Metroplex.

Inner City is a Saunderson collaboration that came about “by accident,” according to Saunderson. In 1987 he recorded a backing track in his home studio, but needed lyrics and a female vocalist. His friend, Chicago house producer Terry ‘Housemaster’ Baldwin suggested Paris Grey. “Paris agreed, flew into Detroit, came up with lyrics and ‘Big Fun’ was born.”[1] Saunderson filed away the tape until, months later, UK dance entrepreneur Neil Rushton came to Detroit in search of music for a compilation album, Techno – The New Dance Sound Of Detroit for Virgin Records. Neil enthusiastically included “Big Fun” on the album. It was soon released as a single and became a worldwide smash, only to be outsold by Inner City’s follow-up single, “Good Life.” A debut album, Paradise, soon followed. Over the years, and after three albums, Inner City had about 12 Top 40 hits in the UK and two Top 20 albums, with combined sales of more than 6 million.

The E-Dancer project Saunderson creates music that is “more underground.” The first E-Dancer album, ‘Heavenly,’ was released in 1998 to critical acclaim; Spin magazine named it “one of the ten best albums you’ve never heard.”

Kevin’s two productions Inner City “Say Something” (Concept) and Reese Project “This Means That” (SuSu) both provided late summer 05 hits in Europe, reaffirming Kevin’s standing as one of the ‘INNOVATORS’, and a leader in the industry.One of the most exciting movements for Kevin of 2005, was his new title which has also given him one of the biggest challenges of his career, the Producer of FUSE-IN, Detroit?s 6th electronic festival on Memorial Day weekend at Hart Plaza featured an outstanding line up which included Mos Def, Ken Ishii, Carl Craig, Kevin Saunderson, Green Velvet, Ritchie Hawtin, Underground Resistance, Alexander Robotnick and many more. As Kevin states “What we?ve done in our history in Detroit with techno is a result of a love for all kinds of music, I did?nt want this just to be a techno event, I wanted techno to be the foundation and for people to realize how powerful Detroit has been and still is, I wanted to put on a good show with good artists so people can be inspired by the music”.

2006 through 2007 celebrated 20 years of Kevin Saunderson?s music Productions with the Elevator World Tour- The tour featured both House and Techno DJ sets & a live show incorporating all his most popular productions from 1986-2006. This included tracks from E-Dancer, Esser’ay, K S Experience, Kaos, Keynotes, Reese, Reese + Santonio, , Tronikhouse, Intercity, Kreem, Inner City and The Reese Project. The live show featured stunning visuals, and crystal clear audio, taking the audience on a breathtaking journey through the roots and soul of Kevin Saunderson from house to techno and back again. These live shows gave Kevin the opportunity to entertain and inform his audience on his unique history. This incredible body of work, which for the first time will be under one umbrella, clearly defined and clarified the artistry of the man they call THE ELEVATOR. True to his dream, Kevin Saunderson elevated the deep sound of Detroit Techno and took it from the underground into the hearts and souls of music lovers the world over with his Inner City and The Reese Project recordings. These live events will surely be remembered for years to come as a celebration of the one of the greatest ambassadors for techno to come out of Detroit. In 2007 Kevin was back in the studio working on new productions, and remixes. The first to come out of the box, was a stunning re-working of Claude Von Stroke?s “Who?s Afraid of Detroit” which received 5 star reviews and plaudits from every corner of the globe. In June 07 Kevin released a new compilation CD on Umek’s Explicit label “The Detroit Connection” (EXPLICITCD007) which received rave reviews across the board and featured i M8 Magazine’s Top 20 Compilations of 2007

Kevin’s KMS imprint in association with Carl Craig’s Planet E label release part 1 of the ground breaking series of new innovative “History Elevate” vinyl only remixes of classic Saunderson productions on exclusive 12” double A sides in 2008, the tracks paved the way for the double CD release “History Elevate” (Fabric/KMS) in May 2009 to create a project tying the past with the future, mutating the techno virus ever further and signposting the talents of a true dance music innovator they call ‘The Elevator’. This project included collaborations with the cream of 21st Century talent: Carl Craig, Claude Von Stroke, Loco Dice, Joris Voorn, Samuel L Session, Simian Mobile Disco , Luicano, Jesse Rose, and Matthew Jonson. Kevin proved once more that he can bring together the cutting edge of new talent with his proven classic skills, and create something which sounds thoroughly fresh, with the class to have the kind of longevity that tracks like “Big Fun” and

“Good Life” still enjoy. The release of “History Elevate” (Fabric/KMS) was accompanied by a worldwide promotional tour and the rumours of Inner City reforming for select dates across Europe … the resultant festival and super-club tour dates were phenomenal to say the very least.

“With a well-selected and diverse set of remixers and some legitimately classic raw material to work with, ‘History Elevate’ may go down as the remix series against which all others are judged.” (Resident Advisor)

2010 saw Inner City back on the road guesting at Festival across Europe and 2011 gave us the beginnings of a new studio concept from Kevin and Inner City with the first release on Defected “Future” released in December 2011 going straight to number 1 in Beatport & Traxsource as well as making Pete Tong’s Essential New Tune (video here http://youtu.be/J4L_xZu3qUE). Kevin released
his “Kevin Saunderson in the House” double CD mix on Defected in January with a press campaign featuring covers of DJ Mag in Spain and UK, Mixmag and DMC. Throughout 2012 Kevin and Inner City headlined the key festivals including Extrema Holland + Belgium, Bestival and Bugged Out. Kevin also celebrated the 25th Anniversary of KMS Records with the enormous “KMS 25 A Tribute to Detroit” event at the Movement Festival, Detroit, with guest performers including close friends, producers and collaborators on KMS: Derrick May, Juan Atkins, Eddie Fowlkes, Blake Baxter, MK, Terrence Parker, Carl Craig, Kenny Larkin, Stacey Pullen, Kyle Hall and many more.